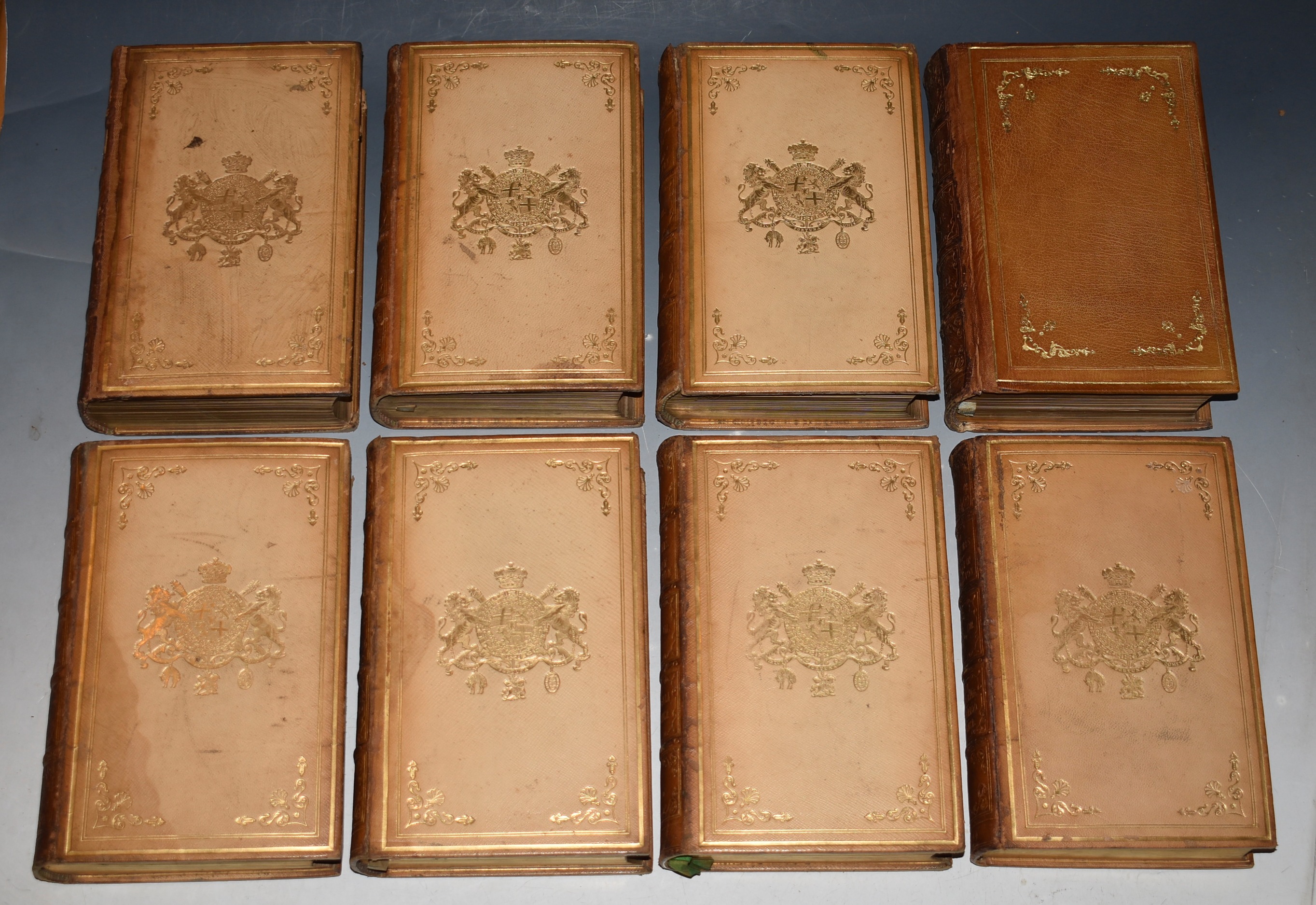 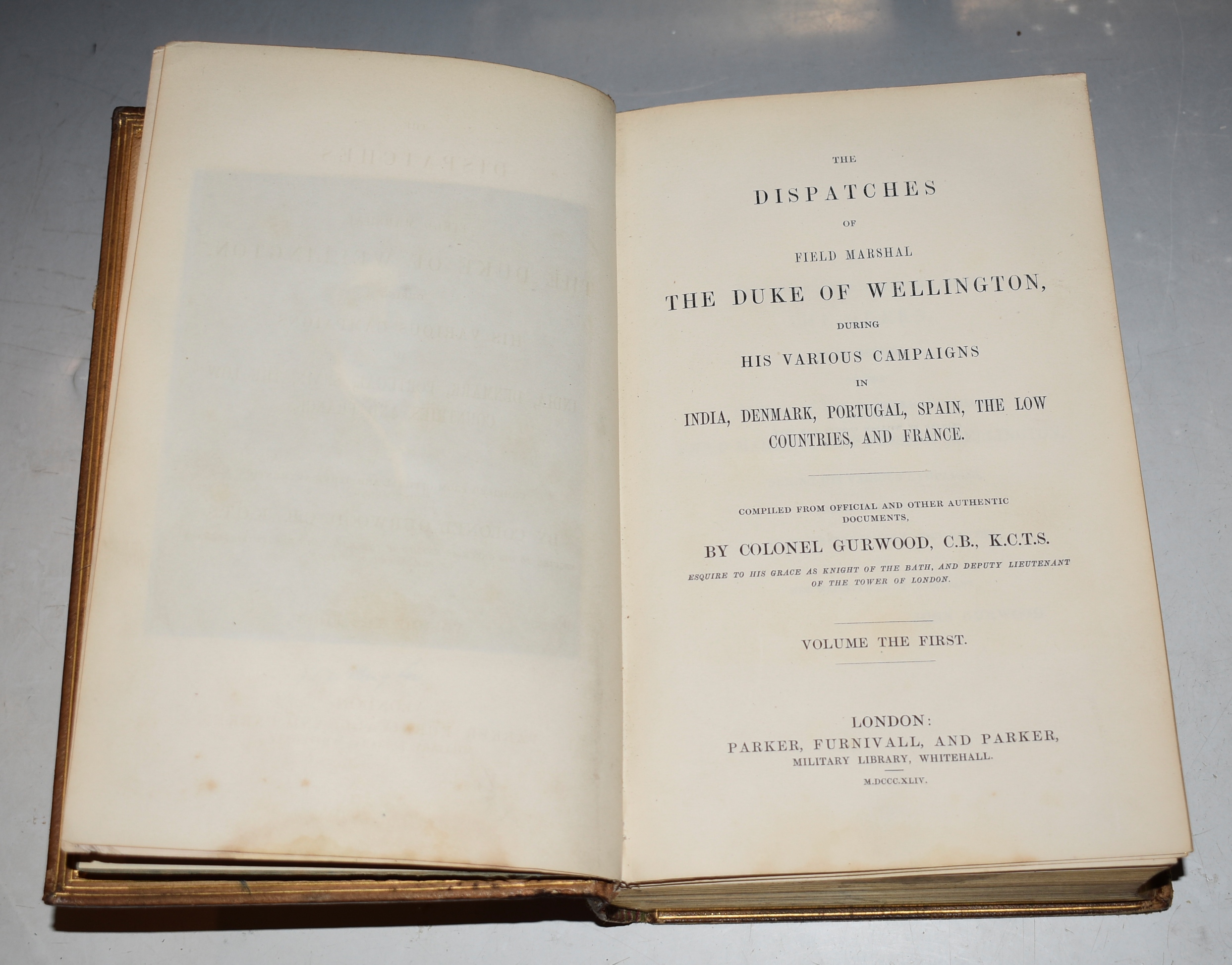 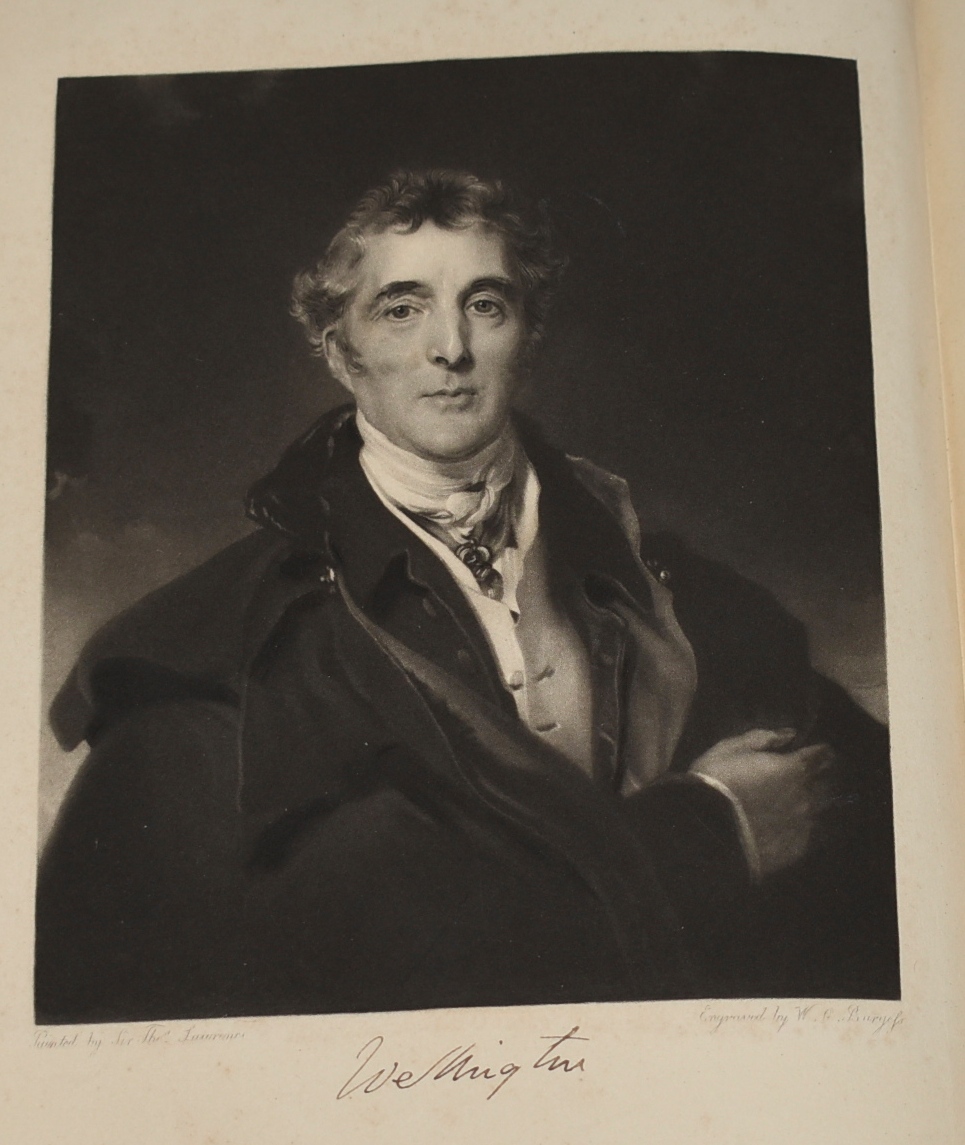 Dispatches of Field Marshal the Duke of Wellington, During His Various Campaigns in India, Denmark, Portugal, Spain, The Low Countries and France. Compiled from Official and Other Authentic Documents by Colonel Gurwood. An Enlarged Edition. Complete in Eight Volumes.

Eight Volumes. Hardback, 9.5 x 6 inches. Cream morocco leather bindings with decorative gilt paneled boards, royal crests to front and rear sides, gilt lettering, raised banding and extensive gilt decorations to spines. Full gilt page edging and blue silk endpapers. In very good conditions. Some wear and handling to covers; spines rubbed and darkened, edges rubbed, corners bumped. Boards darkened around edges, with some rubbing and handling marks. Professional repairs to front hinge of vol.1.; vol.4 with repaired rear hinge and front board has been replaced in a slightly different style with slightly darker brown leather. Vol.8 front hinge is cracked with neat glue repair. Some fading to silk endpapers. Minor stain to bottom edge of frontis plate in vol.1 (does not affect pages.) Inside pages all very clean, bright and tight throughout. Else a very clean and tight set. 8 Volumes. Illustrated with an engraved frontis portrait in volume 1. From the library of August Phillimore, with his coat of arms on inside front cover, and his name on opposite page. ( Admiral Sir Augustus Phillimore, father of Admiral Sir Richard Phillimore. He served in the Royal Navy from 1835 to 1887. In the 1860’s he married Harriet Fortescue, and in 1866 purchased Shedfield House. He and his wife entertained many important personages including Queen Victoria, Disraeli and his wife, General Sherman, the US Confederate leader, etc.).

Title: Dispatches of Field Marshal the Duke of Wellington, During His Various Campaigns in India, Denmark, Portugal, Spain, The Low Countries and France. Compiled from Official and Other Authentic Documents by Colonel Gurwood. An Enlarged Edition. Complete in Eight Volumes. 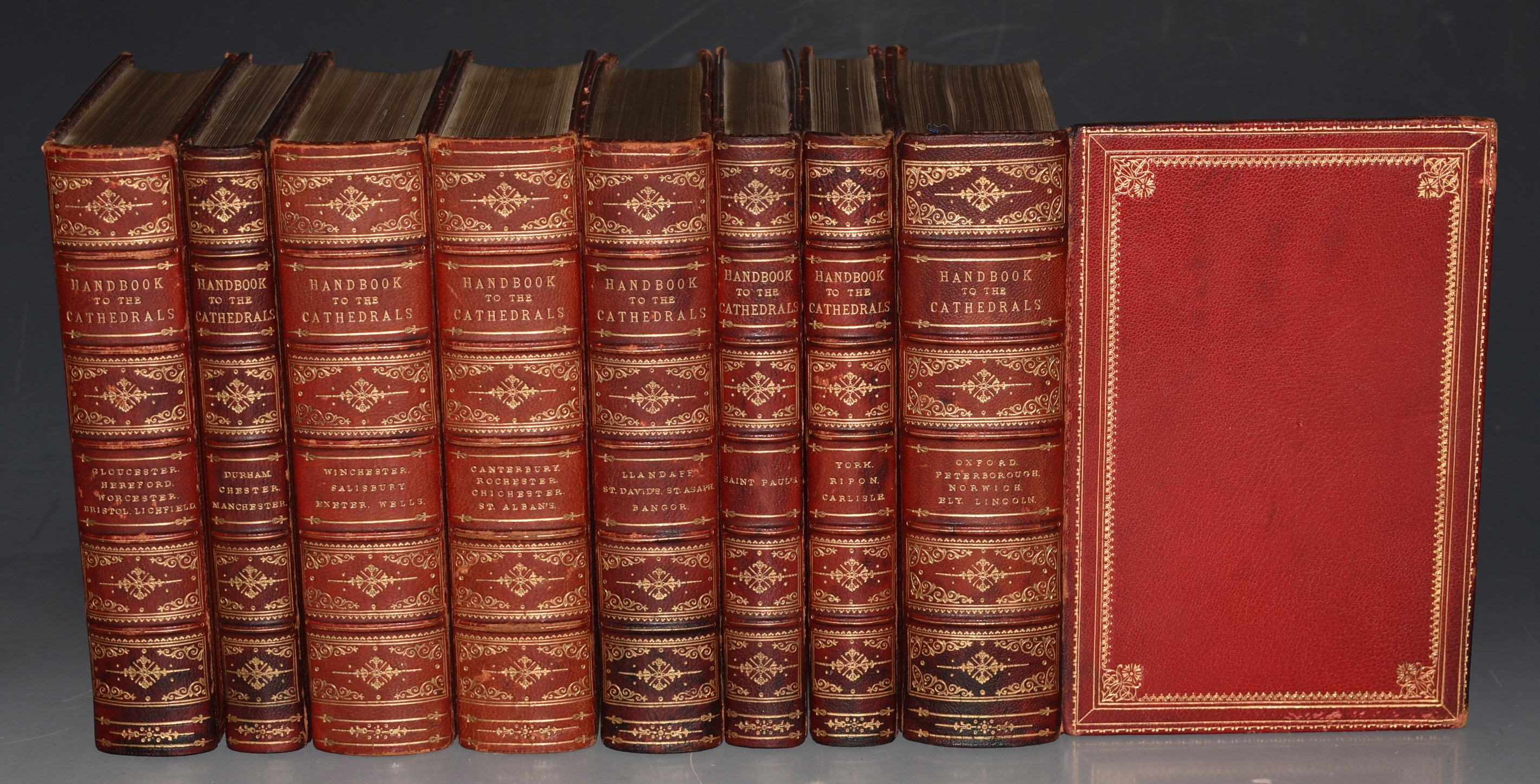 Handbook to the Cathedrals of England: Complete in Eight Volumes. 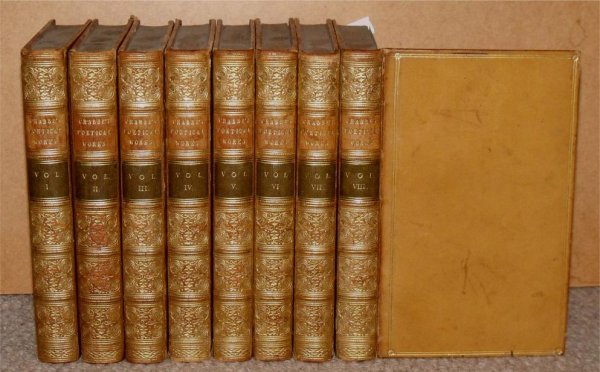 The Poetical Works of the Rev.George Crabbe. With Letters and Journals, and Life. By his Son. In eight volumes. 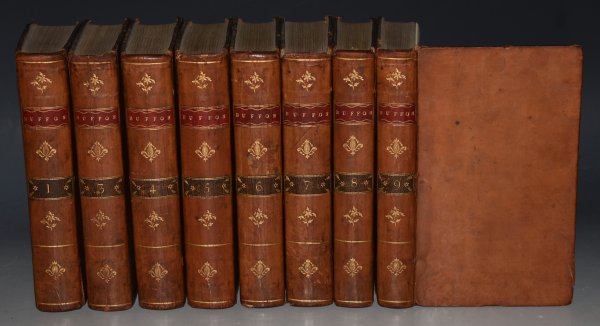 Natural History, General and Particular. Translated into English. Illustrated with above 300 Copper-Plates, and occasional notes and observations by William Smellie. Second Edition. In Eight Volumes (of Nine.) 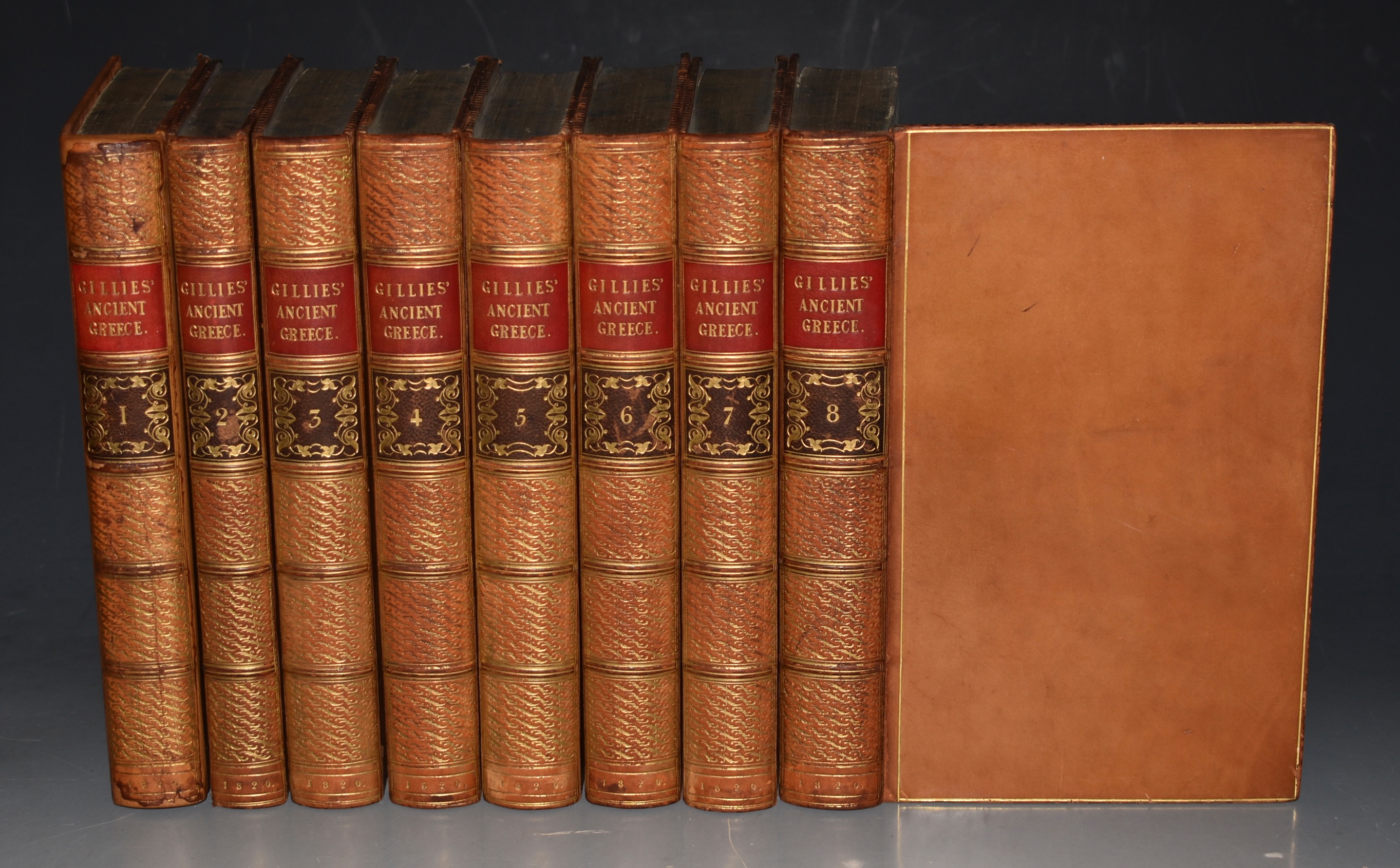 The History of Ancient Greece, Its Colonies, and Conquests; Including the History of Literature, Philosophy, and the Fine Arts. Parts FIRST and SECOND. Complete in Eight Volumes. (Each part in Four Volumes respectively.) 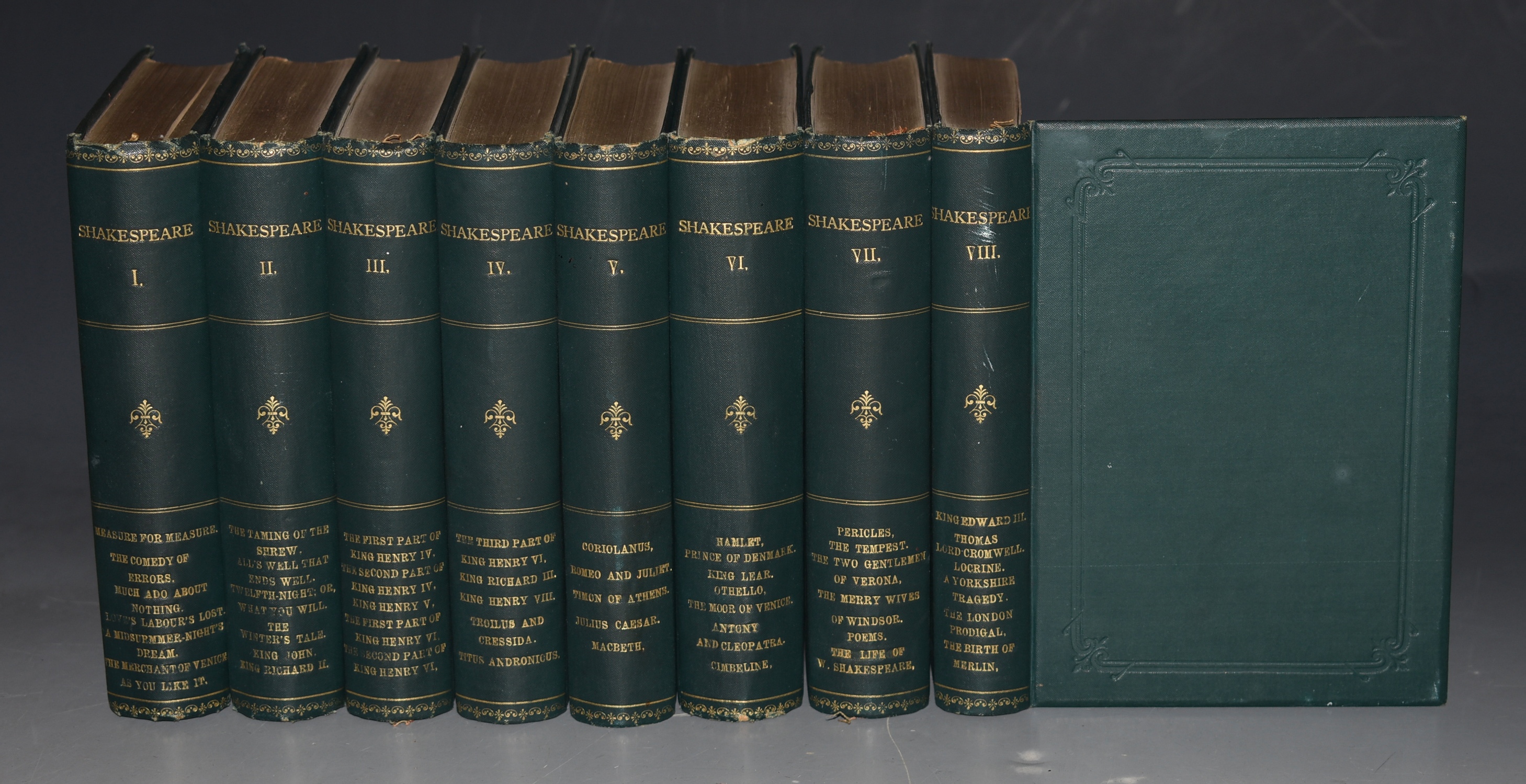 The Works of William Shakespeare, Eight Volume Set. From The Text of The Rev. Alexander Dyce’s Second Edition, Complete in Seven Volumes. PLUS: Doubtful Plays, in One Volume. Tauchnitz Collection of British Authors Vols XL - XLVI & 1041. 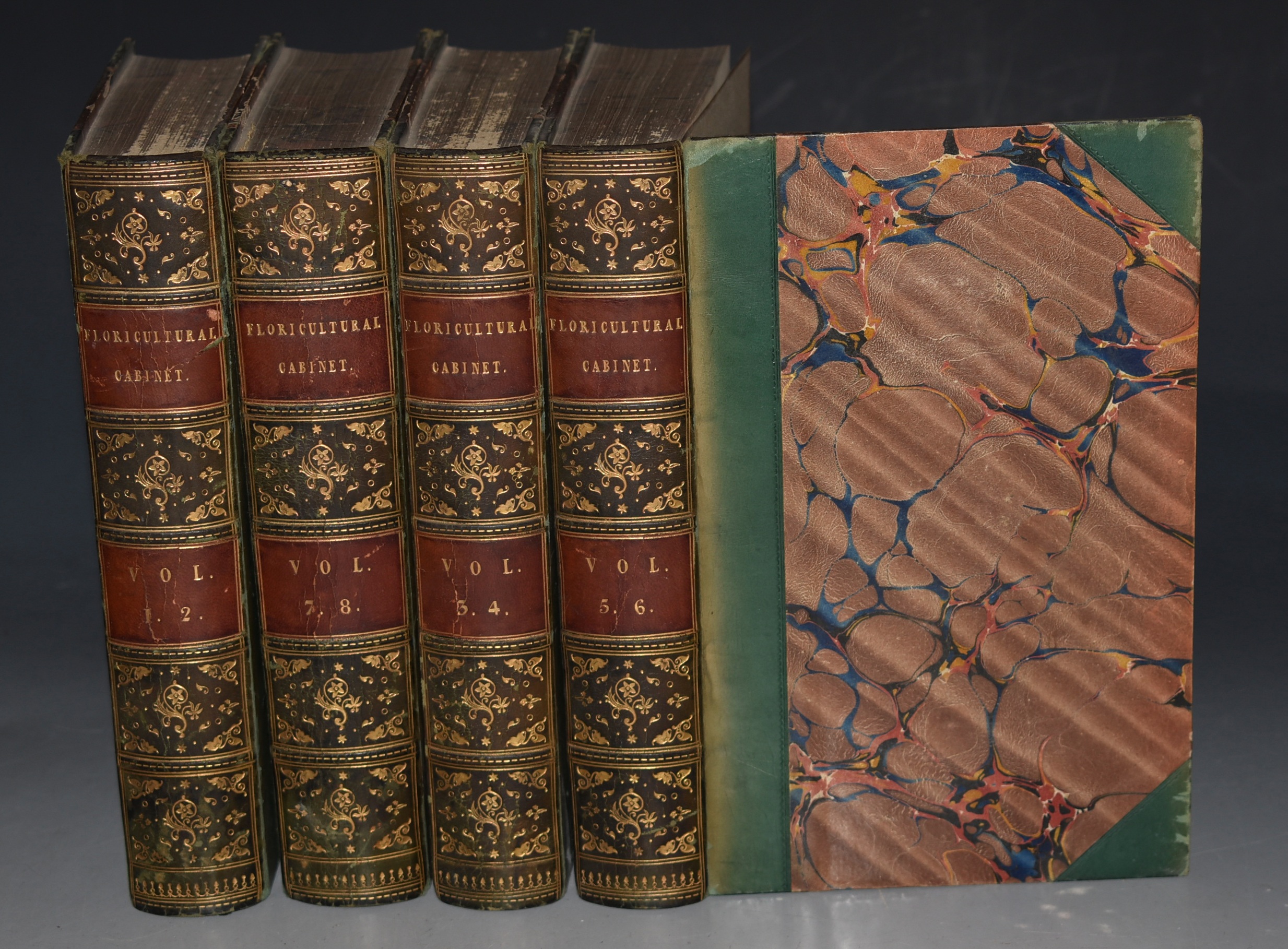 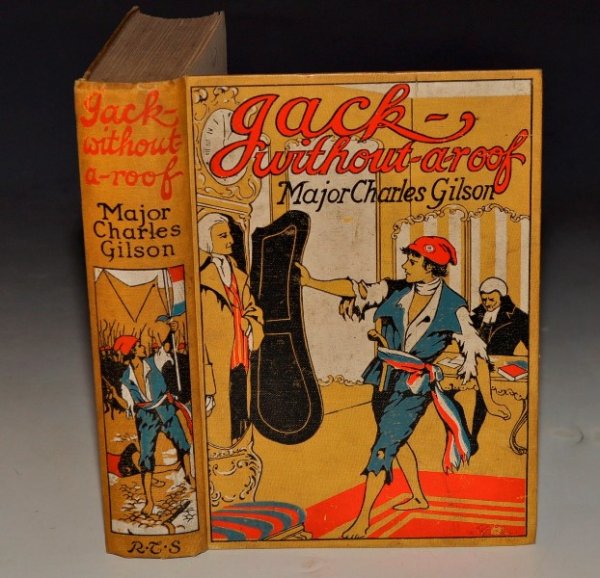 Jack Without a Roof A Story of the War in La Vendee. With a frontispiece in colour and eight full-page illustrations by John De Walton. 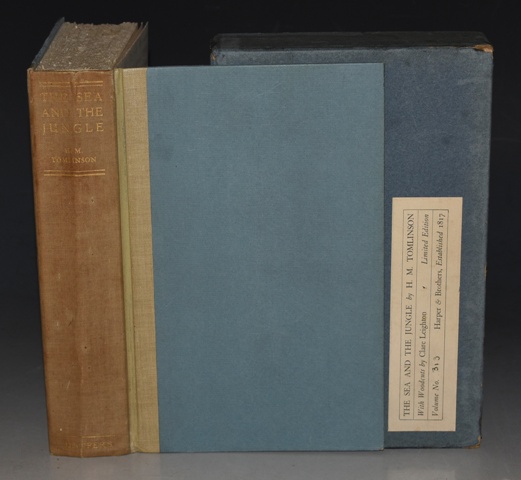 The Sea and The Jungle Being the narrative of the voyage of the tramp steamer Capella from Swansea to Santa Maria in the Brazils... Done in the Years 1909 and 1910. With Eight Woodcuts by Clare Leighton. SIGNED Limited Edition. 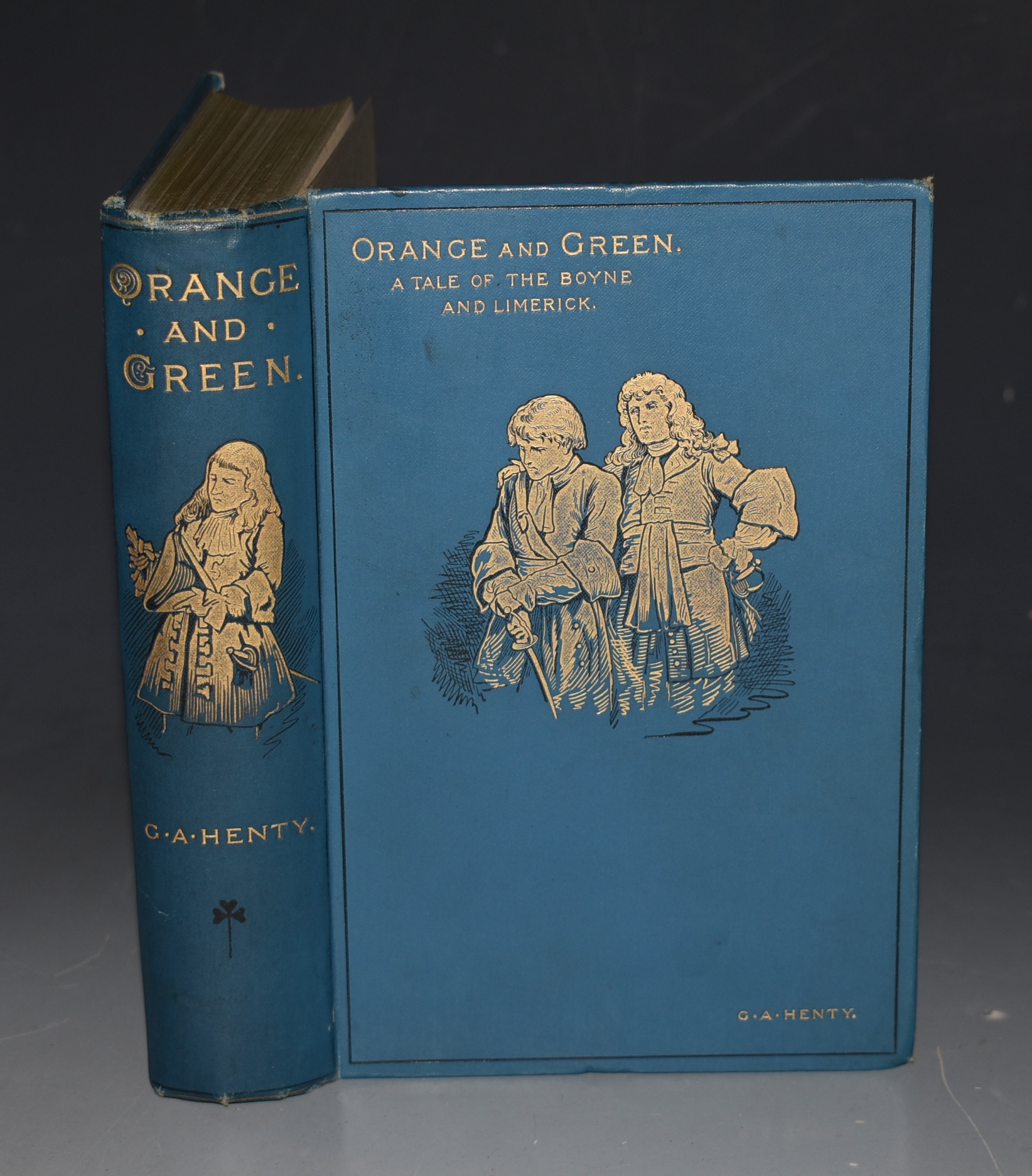 Orange and Green. A Tale of the Boyne and Limerick. With eight full-page illustrations by Gordon Browne.

Dispatches of Field Marshal the Duke of Wellington, During His Various Campaigns in India, Denmark, Portugal, Spain, The Low Countries and France. Compiled from Official and Other Authentic Documents by Colonel Gurwood. An Enlarged Edition. Complete in Eight Volumes.