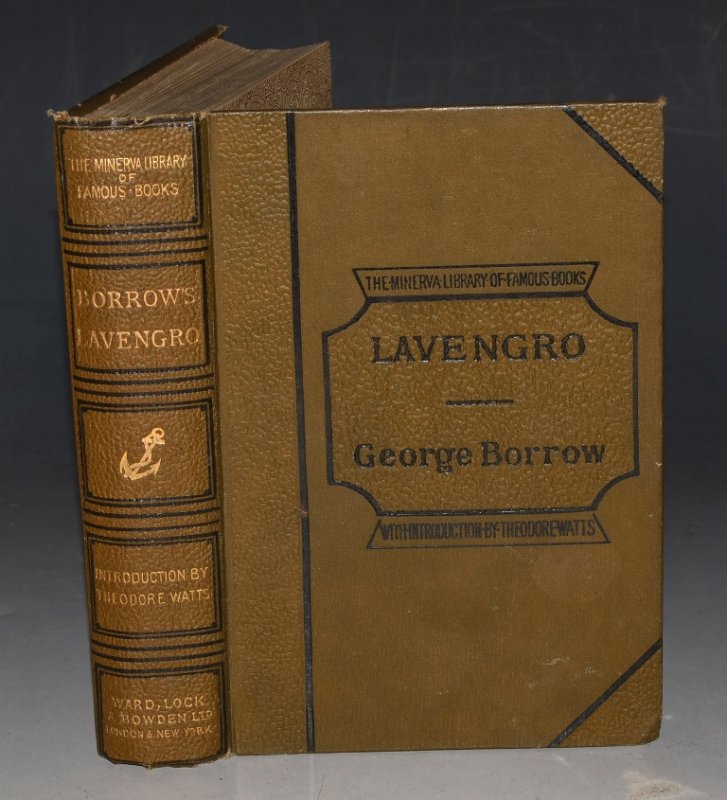 Lavengro: The Scholar, the Gypsy, the Priest. With an introduction by Theodore Watts. Second Edition. The Minerva Library of Famous Books.

Hardback, 7 x 5 inches. Brown cloth with gilt lettering to spine, black lettering and blocked design on front and spine in ‘quarter-bound’ style, with pebbled effect on spine and corners. Decorative patterned endpapers. In very good condition. Slight lean to spine. Some fading to cloth and some rubbing to corners and edges. Endpapers darkened. Some minor foxing to frontis plates else pages very clean and tight. 404pp + 8pp cat. Illustrated with 2 B&W plates. Lavengro is set up as the tale of Borrow's own life of wandering (he visited France, Spain, Russia and the East among others studying their languages as he went). Here, as the son of a soldier, he travels through England, Scotland and Ireland experiencing strange and diverse places and befriending such people as gypsies and tinkers. His adventures lead him to murderers and thieves and to fighting while Borrow always reminds us of his beloved comparative study of languages. However, it is of note that doubt has been cast upon some of his scholarship in this respect and he liked to exaggerate somewhat - though presumably only in pursuit of an exciting story.

Title: Lavengro: The Scholar, the Gypsy, the Priest. With an introduction by Theodore Watts. Second Edition. The Minerva Library of Famous Books.

Lavengro: The Scholar, the Gypsy, the Priest. With an introduction by Theodore Watts. Second Edition. The Minerva Library of Famous Books.