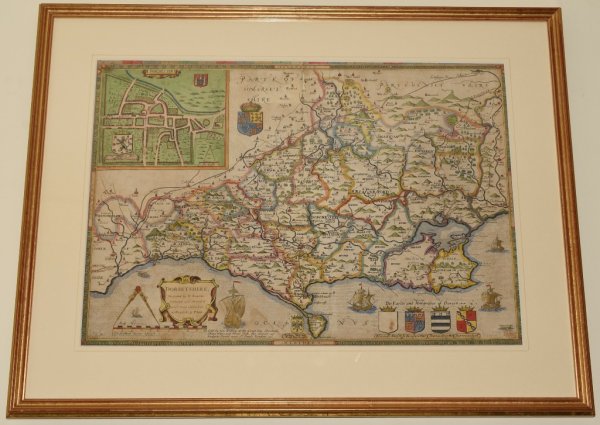 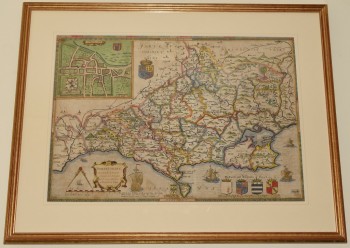 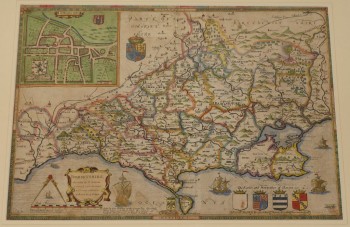 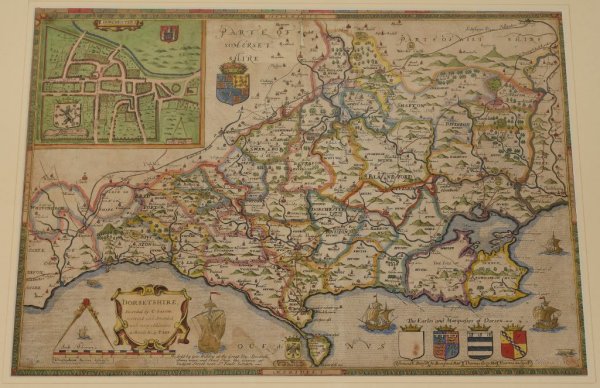 AN ORIGINAL ENGRAVED MAP OF DORSET.

Lg.map (engr.surface ca 54 cm x 38 cm). Frame 68.5 cm x 22 cm In very good condition. Relaly nice colouring. Some light browning, with small inch split head of center fold. Nice early hand-colouring of the Hundreds, the borders, town map and other decorations). In ivory mount ( 5.5 cm wide ) with nice wash-line & gt.borders. Held in a nice gilt frame with glass front. A most attractive and decorative map with inset town plan of Dorchester, ships and elaborate coat of arms. SCARCE. This edition differs from the earlier one by the inclusion of a town plan and of roads. Saxton, c. 1542 – c. 1610, born in Yorkshire, was commissioned to survey the counties of England and Wales during 1573 - 1579 under the authority of Elizabeth I. The maps were engraved on copper by the finest engravers of the day, mostly from Holland, such as Leonard Terwoort, Remegius Hogenburg and Augustine Ryther (an Englishman) from 1574 – 1595. With few changes Saxton’s maps were frequently reprinted until about 1690 when Philip Lea (fl. 1666 – 1700), a London cartographer and publisher, brought out another edition of Saxton’s “Atlas of the Counties of England and Wales” retitled “The Shores of England and Wales described” in 1690 and again in 1693. Numerous alterations were made to the plates, as evidenced by this example. The Royal Arms and some of the decorations were replaced by town plans from Speed’s “Theatre of the Empire of Great Britain”. A few geographical alterations were made, but most important was the inclusion of roads, taken from Ogilby’s “Britannia” published a few years earlier. This map displays the high standard and distinct character of Saxton’s engraving, particularly in the place-names, towns and villages, and trees. In 1720 the maps were reprinted and published by George Willday of St. Pauls, and this map is from this printing, which is relatively scarce, being less common than the 1690/93 Lea editions. The colouring is modern but correct. It is unusual to find the reference grid on as early a map as this as many maps have had it removed before framing. Notice the omission of letters ‘j’ and ‘u’ to avoid confusing them with ‘I’ and ‘v’, or possibly with the Roman numerals I and V? Lea used four conventional signs to indicate the status of roads from a double solid line (major) through one solid with one dashed, double dashed, and finally one solid line to denote a minor road. This map shows all four, and is a very early example of the now universal adoption of the conventional sign in cartography. 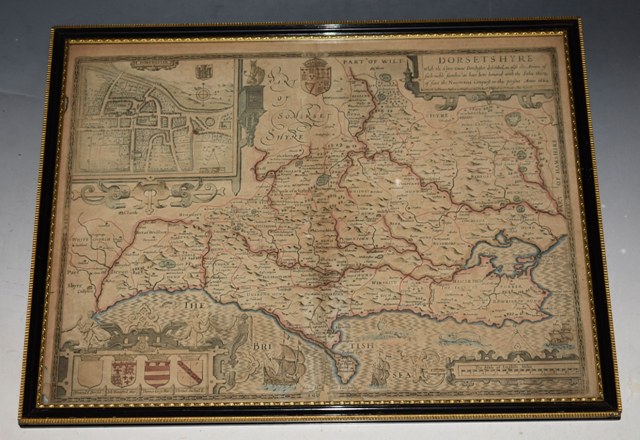 Dorsetshyre. Original engraved antique map of Dorset. With the Shyre town Dorchester described as also the Armes of such noble families as have bene honored with the Titles thereof since the Normans Conquest to this present Anno 1662 (sic). 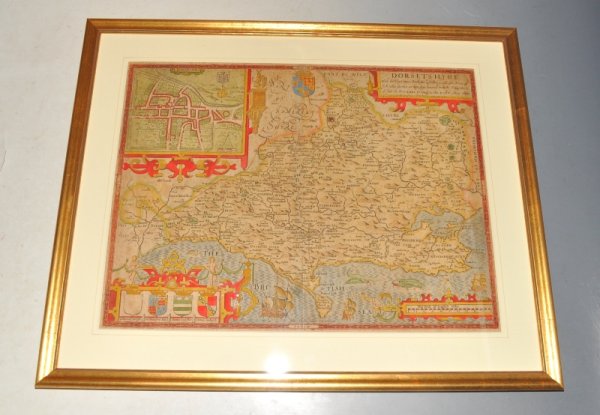 Dorsetshyre. Original engraved antique map of Dorset. With the Shyre town Dorchester described as also the Armes of such noble families as have bene honored with the Titles thereof since the Normans Conquest to this present Anno 1662. 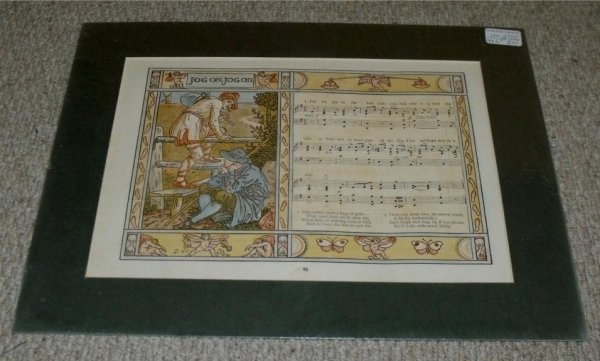 Attractive original illustrated song “Jog On, Jog On”. From the book, “Pan Piped”. 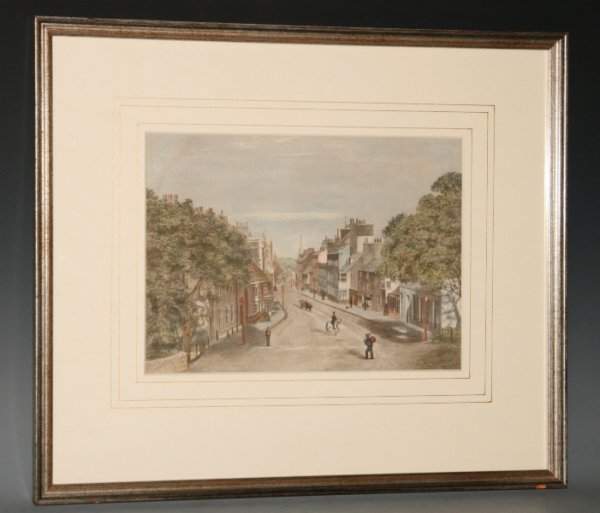 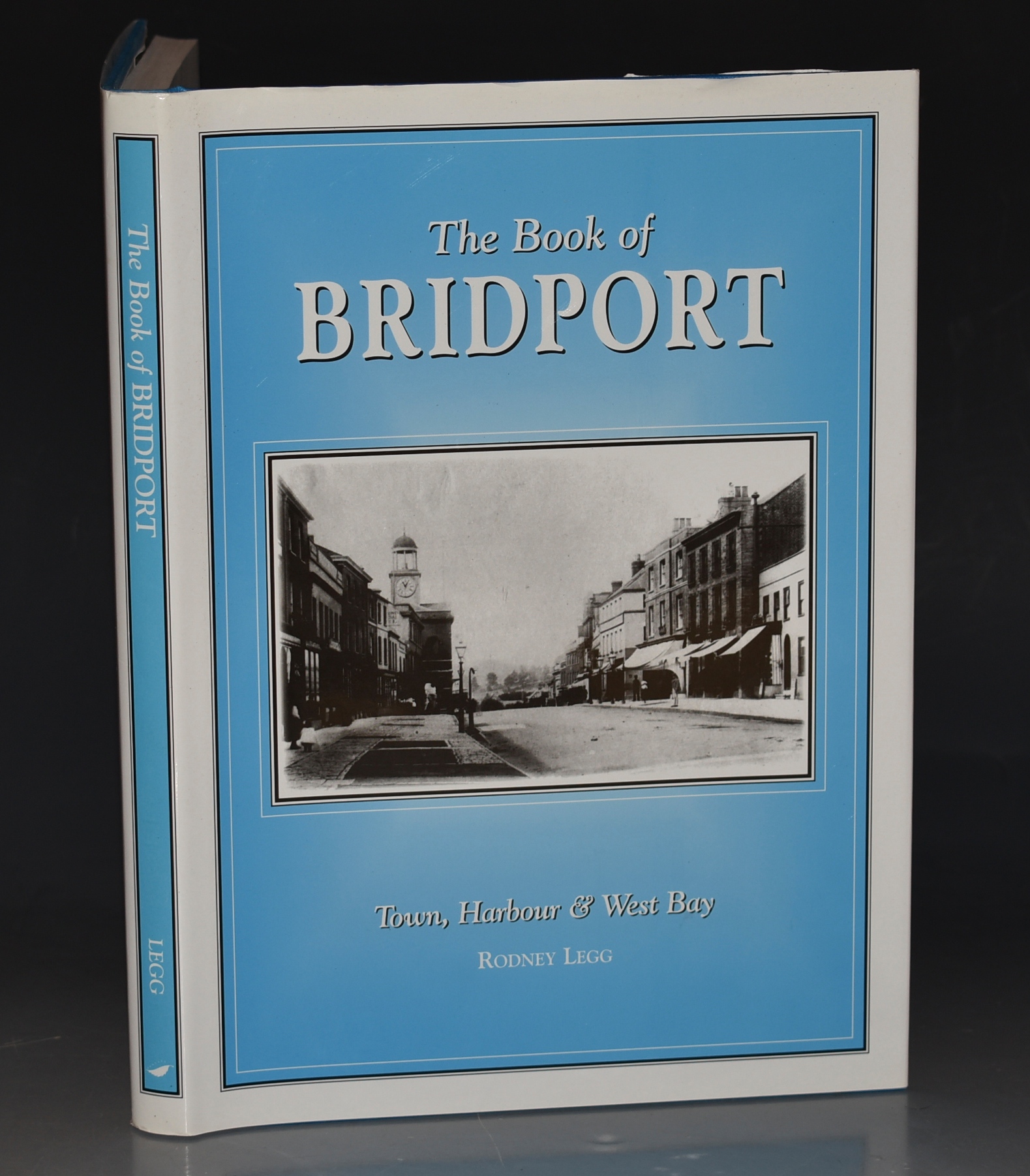 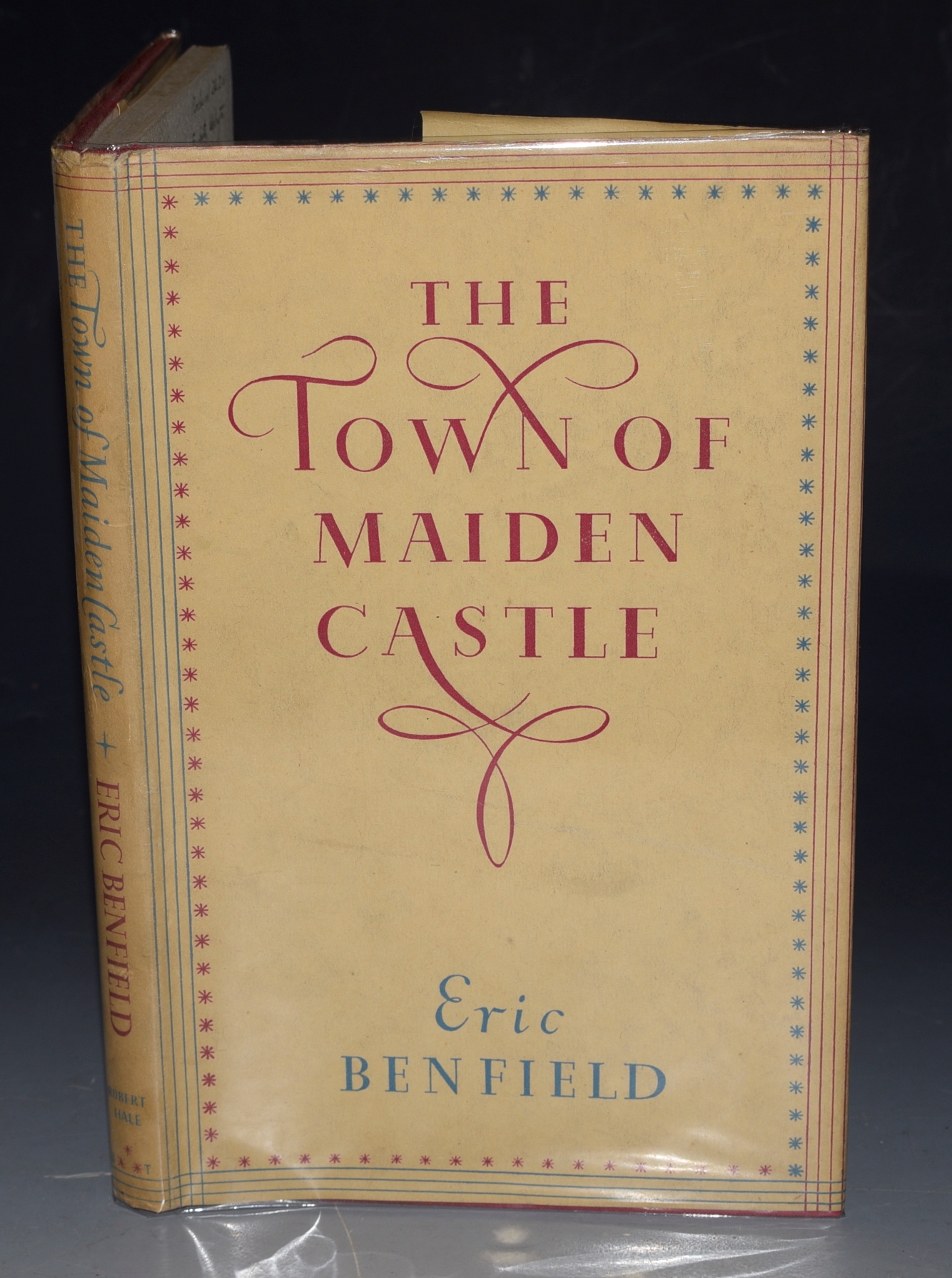 The Town of Maiden Castle. 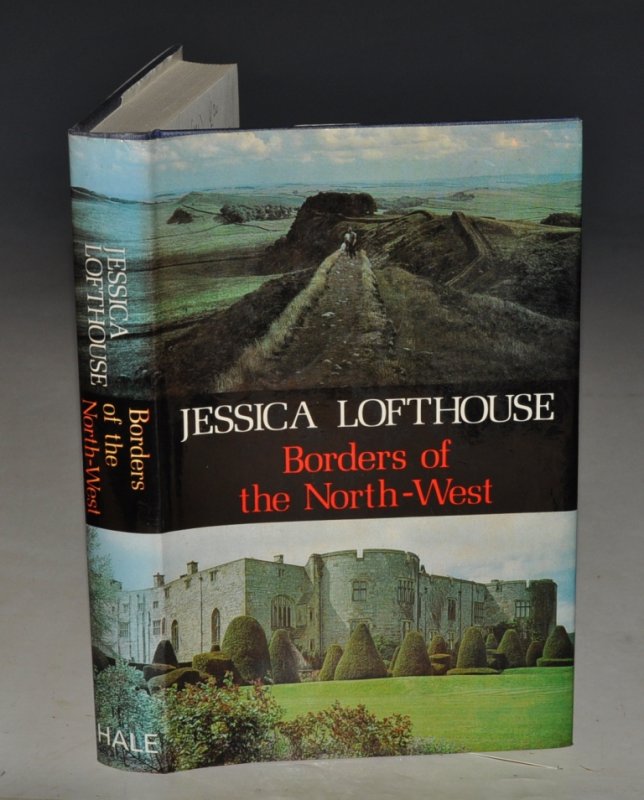 Borders of the North-West. Illustrations by the Author. 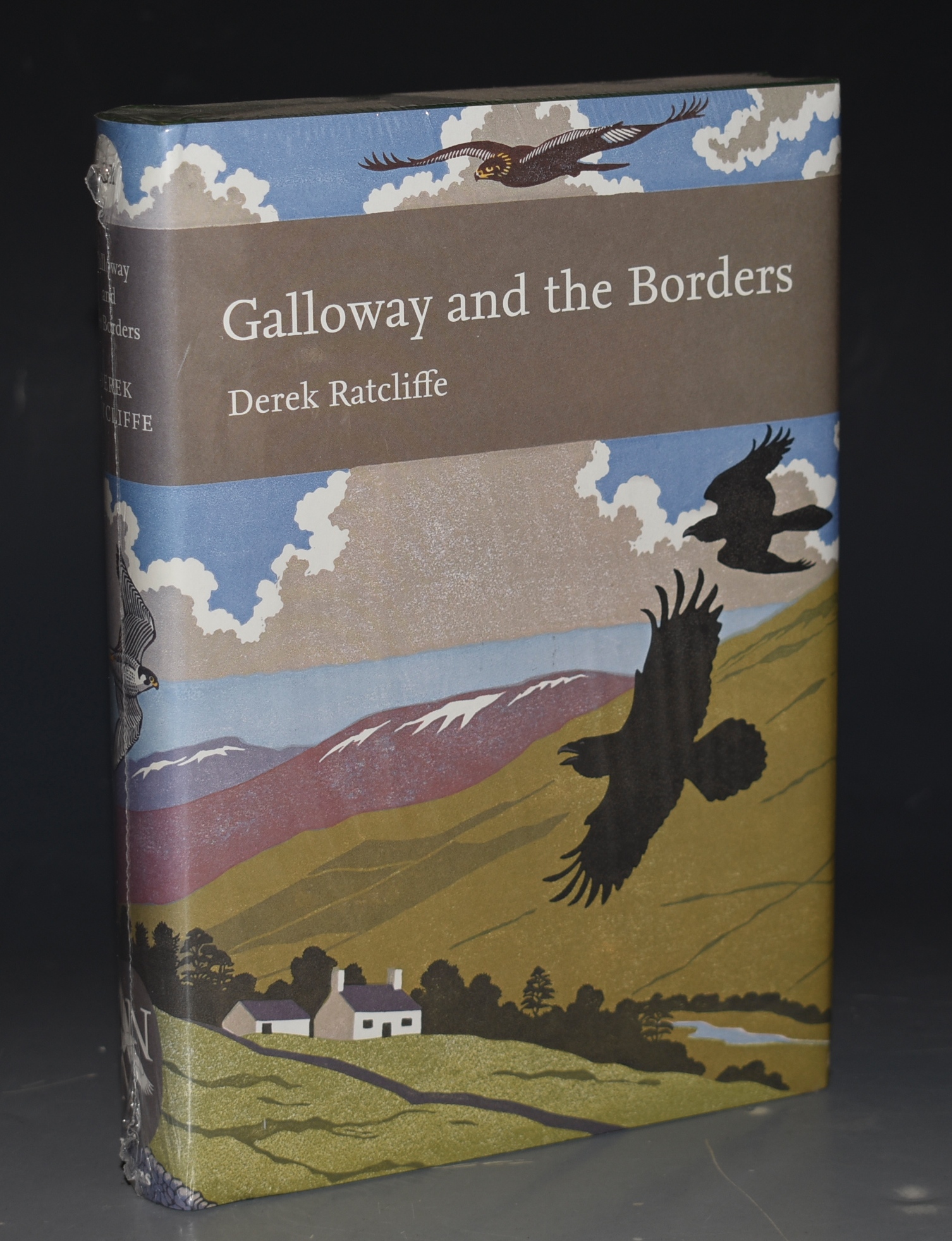 Galloway and the Borders. (New Naturalist 101).

AN ORIGINAL ENGRAVED MAP OF DORSET.